Only looking for a timing belt replacement interval?

What they do,
how much they cost,
what happens if they break,
and how important they are

Welcome to our timing belt page! To discover more about timing belts, their importance, and what you need to know about replacing them, continue reading. We highly recommend reading through the entire article, even if you already know some about cars, because we tell you a little bit about how we as a business make decisions about the normal add-ons to timing belt jobs.

To the left you’ll see a button pop up (with a book, ) that will let you skip the article and go straight to the interference-fit engine reference guide we’ve set up at the bottom of the page. If you don’t know what “interference-fit” means, no worries; you’ll know by the end of this article. Without further ado… 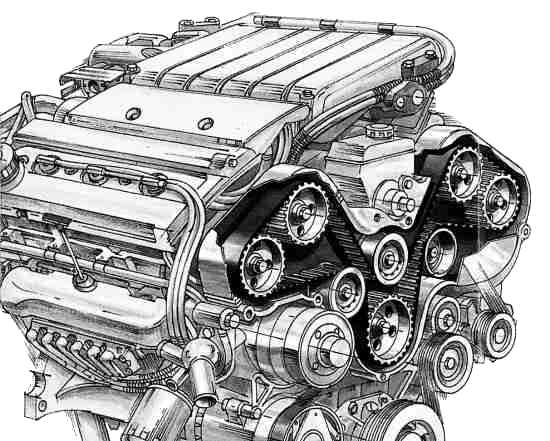 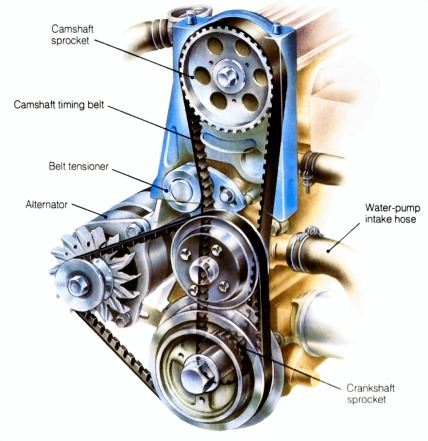 What’s it do? The “technical” part

The timing belt is essential to the operation of your car’s engine.  There are two main “shafts” in your engine, the Crankshaft, and the Camshaft.  The timing belt connects these two shafts and makes them turn together at the right “time” (similar to the way a bicycle chain connects the pedals to the back wheel).  This makes sure all the other goodies in the motor (like valves and pistons) are jumping and hopping at just the right “time”. Hence the name…”timing” belt.

What happens when it breaks?

The timing belt is made of rubber, eventually it rots, and breaks.  When this happens, your car stops. You have to get the car towed because it won’t start until the engine is “re-timed”, and the belt replaced.  With some cars you can replace the belt and that’s the end of it, with other cars, it’s just the beginning of sorrows…

Some engines have a very close fit between the top of the piston and the bottom of the valve.  When the engine is “in time” this close fit is just fine, because the piston is never up at the same time that the valve is down.  BUT, when the timing belt breaks, the valves stop moving.  Some of them are in the down position, and the piston, not aware of the little valve’s predicament comes flying up and SMASHES into the poor little valve.  The valve gets all bent out of shape over this and decides not to let your engine have any compression in that cylinder.

Life with a bent valve

Even if you replaced the timing belt at this point, the engine would still not run right, it would be very weak, and probably cough and hack because of the bent valve’s poor health.  You basically “have to” fix this condition or shoot the car to put it out of its misery.

In order to fix this, a “valve job” is required.  This costs anywhere from $2500 to $3500, depending on the make of your car, and on how many “extras” are discovered that you need once the engine is torn apart.  The “good news” is…. 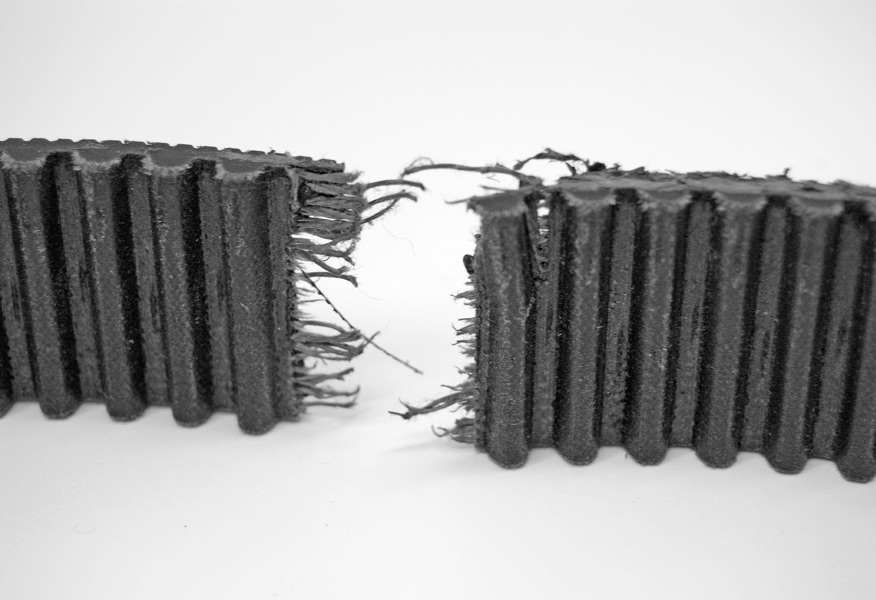 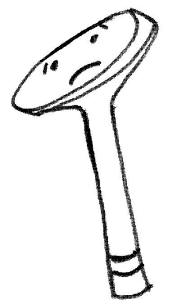 You can save the little valves!

All you have to do is replace the timing belt when it’s due, instead of waiting until after it’s dead.  The cost may be high, but it’s a whole lot cheaper than waiting for it to break.

The old standard interval for timing belt replacement was every 60,000 miles.  Even if you don’t drive much, you should replace it every 6 to 8 years because age and dry rot will weaken it just as much as mileage and use.  Today, new materials are used and sometimes they can go 100,000 miles or more.

Our interference-fit engine reference guide at the end of this article lists the manufacturers’ recommended intervals for timing belt replacement on domestic and imported cars and light trucks and lists if yours is a “valve bender” interference fit engine.

Although belt life may vary depending upon driving and temperature conditions, among other factors, these manufacturer guidelines are a good place to start in determining when to change your timing belt.  When the automaker doesn’t make a specific recommendation, we suggest changing the timing belt at 60,000 to 90,000 miles.

All right, How much is it?

The basic timing belt can run as low as $300 to $400 dollars depending on the make of the car.  There are a few exceptions, even a basic job on a few types of vehicles can be $500 to $700. (See below list of the more expensive types.)

Most V-6 engines; some 4 cylinders with dual timing belts; and some Dual Over Head Cam (DOHC) engines.

What are the “other things” that go with it?

The following items should be checked and replaced, if needed, while changing the belt. 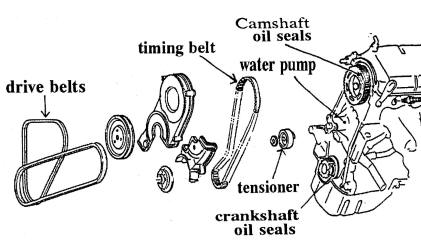 The drive belt(s) have to be taken off to do the timing belt.  If they’re old and cracked, you can put new ones on for no more labor charge, just the cost of the belts.

You have to take the timing belt off in order to get most water pumps off.  A water pump has a little weep hole in it that the water comes out of when it goes bad.  Even if it’s not dumping water at the time, sometimes there’s a trail of antifreeze, or deposits from where it’s been coming out of that hole.  If it shows signs of leaking, you can replace the pump while the timing belt’s off and save a lot of money over doing the jobs separately.

The oil seals behind the cam and crankshaft gears leak oil as they get some age on them.  If they are leaking, the oil gets on the new timing belt, and deteriorates it, causing it to break prematurely, and then you’re back putting another belt on, or bending valves.  If these seals are leaking, it is a very good idea to replace them, since you already have the timing belt off, which is most of the labor required to get to the seals.

If these things aren’t bad, we don’t mess with them, but if they are, it’s very wise to fix them at the same time you do the timing belt.  We’re not trying to jack the price up, we just want to do a first class job that will save you money in the long run.

So please,  Check your Mileage….

If you bought the car used and don’t know when the timing belt was last done, the situation is a bit sticky.  Sometimes we can see if the timing belt has been done by looking at CarFax records. Sometimes we can’t, though. And even if you brought it in for us to look at, unless the belt is really cracked, we can’t tell by looking at it how old it is. We’ve seen belts break that don’t look obviously dry rotted. So, in these cases, where we can’t find CarFax records and especially if it’s a valve bender, it’s better to play it safe than sorry. Replace it.

Does your life Need a new belt?

By the way, there is a sorrow awaiting us all that is similar to the timing belt breaking on an engine, but far worse.  Sin has rotted our timing belt to the core.  We are already way out of time with God.  One day when this life is over, and our physical bodies break, the “piston” of God will “smash our valves”, and for that there is no repair.  Because the wages of sin is death and when we stand before the ultimate judge, it will be too late to repent of our selfishness and pride.

There is an answer!

It’s just like the belt.  If we let God deal with our sin now, we won’t have to be smashed after death.  It’s not too late until the belt breaks and our life is over.  God has provided, not only a “new belt”, but a whole new engine for our cars.  Inside of man, there is a spirit, which is meant to be the true source of power in our lives.  Sin has corrupted that “engine” or strength, and now we serve unrighteousness.

Our new “belt” is Jesus!

He took our old life, and our sin into Himself, on the cross, and absorbed all the punishment and wrath of God that was due US!  By asking His forgiveness, and turning in your old engine (life) to Him, He will give you a new life, and you won’t have to be afraid of the ultimate “Valve Bending” on judgment day.  You can ride in this life with confidence.  Not because you never had a rotten belt, but because Jesus gave you a new one!

He wants your life…  The cost is high, but it’s a whole lot cheaper than waiting for your belt to break.

If you want some help getting a new “engine” for life, I’d love to have a conversation about the evidence that gives good reason to trust Jesus with your life.  You don’t need to call me, but we all need to call God.  Jesus said you can reach the Father through the Son.  “Whoever calls upon the name of the Lord shall be saved.” Romans 10:13. Please call Him before it’s too late.  Feel free to call the shop and ask for Dyrell, or to read more about what it really means to be a Christian, we have posted a few different ways to approach it at www.thejudgment.us

Is my car’s ENGINE a “Valve Bender”?

Is my car’s ENGINE a “Valve Bender”?

Use the menu of vehicle makes to see a page dedicated to that make, each of which includes timing belt replacement intervals and a reference of interference fit engines. If your engine is interference fit, please check your records soon to see when the belt was replaced last.

If your car’s engine is NOT interference fit it is considered “freewheeling” and  probably does NOT bend valves, though we have seen EXCEPTIONS, where an engine that is supposed to be freewheeling bent its valves when the timing belt broke.  Also, it is still important to replace the belt so you won’t get stranded if they belt breaks. (Some engines use a chain instead of a belt.  Call us if you don’t know which you have.)

Is maintenance
worth the cost?

Check out some very important systems your vehicle probably has...

Also learn how to get a lifetime warranty for them!