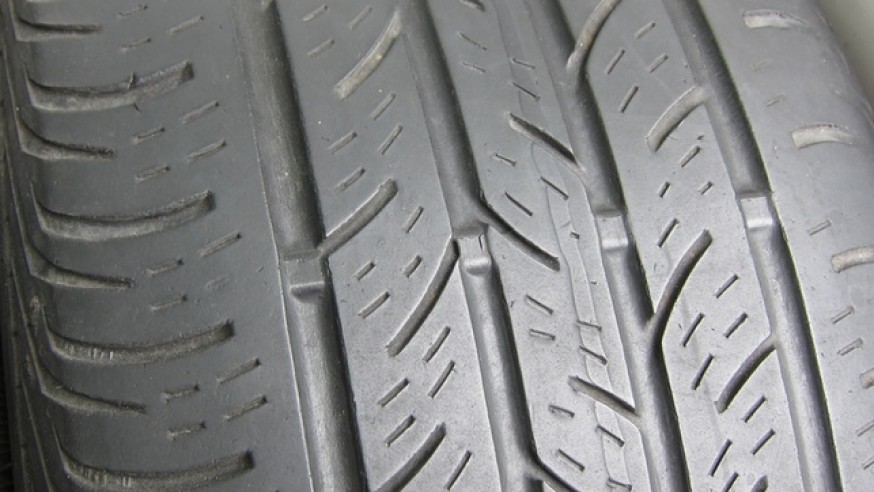 Even tires with half their tread intact may be riskier than you think. Follow us through this testing-based article to see how worn tires react to water differently than new tires. Also included are some helpful driving tips for wet-weather conditions (which we’ve been having a lot of in Chesapeake, lately).

The following article comes from the non-profit organization Consumer reports (which doesn’t get paid by any manufacturer for their testing or reports). The original post can be found here.

Half may be less than you think

The shallow grooves and worn sipes on the half-tread tire (at right) hint at the potential lost wet-weather grip compared with its relatively new identical twin. Our tests show that rain and snow traction can decline significantly even with half the tread intact.

Tires can lose their footing long before they’re worn out. Our tests show that tread can give up a significant amount of grip when it’s still at the halfway point.

That’s particularly worrisome when you realize how many worn tires are on the roads. A recent study by the National Highway Traffic Safety Administration found that nearly 50 percent of the 11,500 cars, pickup trucks, vans, and sport-utility vehicles the agency checked had at least one tire with half-worn tread. Another 10 percent had at least one bald tire.

Worn tires—especially bald ones—can be deadly on wet roads, where the grooves aren’t deep enough to channel water out from beneath the tread. The result is hydroplaning, where the tread skims the water’s surface and the vehicle no longer responds to the steering wheel. Wet-weather braking and snow traction also decrease as tires wear.

Tires are considered bald when one or more of their grooves reaches 2/32 of an inch deep, compared with about 10/32 of an inch for new tires (tread wear is usually measured in 1/32-inch increments). Manufacturers have made bald tires easier to spot by placing a series of molded horizontal bars at the base of the grooves. The bars become flush with surrounding tread when wear reduces a groove’s depth to 2/32 of an inch. That’s also the point where tires will flunk a state safety inspection—and where tread must be worn for you to collect on a tire’s tread-wear warranty.

Unfortunately, 2/32 of an inch may be too late if you drive in rain or snow. Based on our tests of new and half-tread-depth tires, you may want to consider shopping for new ones on your car or truck closer to the 4/32-inch groove depth. For more information on this.

We tested two all season tire models comparing their performance with full and half tread depth.

Based on their warranties, the tires should travel roughly 25,000 to 40,000 miles before their tread reaches the halfway point. To simulate wear without the wait, we used a special tire lathe to shave approximately half the tread depth from three sets of tires, one set for each model. Next we logged 1,000 road miles, then compared the half-tread tires with identical sets of new tires in tests through wet, dry, and snowy conditions.

Actual road wear would have also aged the rubber, reducing grip even further. But differences between our half-tread and full-tread tires were striking:

Deep grooves and an array of small slits, called “sipes,” help most new tires bite into snow. Shallower tread and worn-away sipes reduced snow grip markedly for our half-tread-depth tires. Accelerating to 20 mph on our snow-covered track took an average of 12 feet longer than it did with the full-tread tires, resulting in nearly 15 percent less snow traction overall.

The faster you drive, the greater the risk of hydroplaning, since higher speeds allow less time for water to escape through the tread grooves. Shallower tread worsens that situation by allowing more water to stay beneath the tire. Our half-tread tires began to skim over the water’s surface at as slow as 40 mph in our hydroplane test, about 3 to 4 mph slower than the full-tread tires. That represents a nearly 8 percent drop in hydroplaning resistance compared with the same model tires when new.

LOSING ITS GRIP: These photos from beneath a moving tire show how even new tread is likelier to hydroplane as speed increases. At 20 mph (left), tread has full contact with the road surface. Hydroplaning begins at 40 mph (center) and gets worse by 60 mph (right). Shallow tread grooves increase the risk of hydroplaning. (Photos courtesy of Bridgestone/Firestone North American tire, LLC.)

Reduced wet-weather braking can be even more dangerous than hydroplaning. Compared with new tires, those with half their tread depth took 3 to 6 feet longer to come to a stop from 40 mph on our wet track with the antilock braking system engaged.

Bone-dry pavement is one place where less tread means more grip, since shallower grooves and sipes put more rubber on the road. That’s why mega-horsepower racing cars typically run on treadless “slicks” for all-out traction. It also explains why the half-tread tires performed better in our dry-pavement handling, cornering, and braking tests.

Better dry-weather grip is not worth the trade-off you’ll make in poor-weather performance, however. The half-tread-depth tires we tested lost far more in wet and snow grip than they gained in dry grip.

Staying safe in the wet

You can make sure that the tread on your existing tires is safe by checking it at least once a month when you check your tires’ air pressure.

SPLISH-SPLASH: We check hydro-planing resistance on an area of our track that has the equivalent of a large puddle. Worn tires tend to skim over water rather than channel it.

Start by culling out the riskiest rubber. Look for bald tires by checking whether any of the wear bars are flush with the tread’s outer surface. Another way to check whether your vehicle’s tires have reached their wear limit is to insert a penny into each groove, Lincoln’s head down, as shown below. Replace the tire if the top of Abe’s head becomes uncovered by any of the grooves.

If your tires are only partially worn, find out how much. Stick a tread-depth gauge (about $5 at auto-parts stores) into each of the grooves on all four tires, as shown in the photo below. Then check how many inches of usable tread remain and match your driving to the tread wear.

Running tire grooves down to 2/32 of an inch may be fine in arid regions where rain and snow are rare. But for rain or snow, you may want to consider replacing worn tires sooner, especially if you begin to experience reduced grip.

Check tires for other flaws. Replace any tire with cracks, cuts, or bulges in the sidewall. Look for uneven wear, which usually signals a wheel-alignment or suspension problem. Either must be repaired to prevent premature wear.

Stick with the sipes that your tires come with. Adding more, called siping, can hurt dry performance and longevity. Remember that even new tires don’t grip as well in rain or snow as on dry surfaces. To drive more safely in the wet:

Slow down. And leave added room between your vehicle and the one in front of you. Safety experts recommend a two-to-three-second lag between the time the vehicle ahead passes a sign or other fixed object and the point at which your vehicle reaches it. Double that distance in rain or snow to give yourself more time to brake.

If your tires hydroplane, back off the gas pedal to regain control. 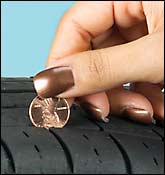 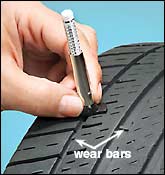